Through the finding of it's raw state, resource extraction, material processing, packaging and distribution, we show you the process of how chalk is formed.

The﻿ Process﻿ ﻿of﻿ ﻿Making﻿ black﻿board﻿ chalk 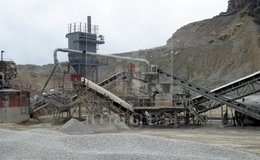 1) Quarrying the Limestone
After a sufficient reserve of raw limestone has been found, the land that covers the limestone is removed with bulldozers and scrapers. If the chalk is close to the surface, an open shelf quarry method can be used. However chances are that it's deeper in the ground, usually an open pit quarry method is used instead. How this works is holes are drilled into the rock, explosives are placed inside, and the rock is blown apart.  (Unknown,2014)

2) Pulverizing the chalk
Once large chunks of limestone have been quarried, they need to be transported to crushing machines where they are pulverized. The first step is primary crushing. Various crushers exist, but the idea is the same: compress the stone with jaws or a cone, or shatter it through impact. Secondary crushing is done with smaller crushers that work at higher speeds, producing pebbles which are then ground and pulverized.  (Unknown,2014)

4) Sifting, extruding, and curing chalk
After grinding, the chalk particles are sifted over vibrating filters to separate the finer particles. The particles are then mixed with water, pushed through a well cut out hole, and cut to the proper length. Finally, the chalk is cured in an oven for four days. (Unknown,2014) 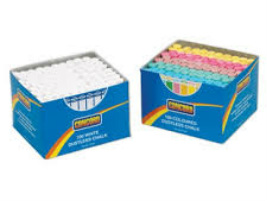 6) Packaging and distributing the finished chalk
Placed in small boxes, the completed chalk sticks are stacked in large boxes to be shipped to office supply or art stores. They are usually sold for use at schools, or any place for anyone that uses chalk regardless. (Unknown,2014)